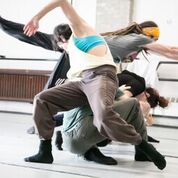 Mrozewski graduated from the National Ballet School in 1993. During his career as a dancer, he performed with the National Ballet of Canada, Le Ballet du Grand Théâtre de Genève, and Les Ballets de Monte Carlo. Early on he had shown a penchant for choreography, and his promise was revealed in the widely acclaimed A Delicate Battle created for the National Ballet of Canada in 2001. That year he stopped dancing, and given his enormous gifts as a dancesmith, it was expected that he would launch a successful international career. The proof lies in his creations for over 13 ballet companies that span the globe. He also choreographed for films, flash mobs, galas, classical music concerts and musicals. The road ahead seemed very clear – a lauded career as an international choreographer.

While the dance pathway is still very much in his life, Mrozewski has also added a new skill set. In 2016, he graduated from the two-year York University/Canadian Stage MFA program, whose focus is large-scale theatre direction. Subsequently, he has directed Shakespeare’s A Comedy of Errors in High Park, and Jordan Tannahill’s Botticelli in the Fire, which won a Dora Mavor Moore Award for Outstanding Production, and netted Mrozewski an Outstanding Direction nomination, which joins his two Dora nominations for Outstanding Choreography.

Mrozewski’s world premieres for ProArteDanza and Older & Reckless, which debut over the next two weeks, reflect both his choreographic and theatrical hats. (Note: in the next few months, he also has new dance and/or theatre pieces for Ryerson University, George Brown Theatre School, the George Randolph Academy, and a Secret Shakespeare performance.)

The Interview (where upon Mrozewski, now 41, talks about his MFA and his two new pieces).

Let’s begin with your going back to school. That was a big bite of two years out of your life.

I had been a dance professional for 20 years, but at that point, I felt I needed to take stock of where I was in my career. I needed different challenges. I had a hunger to learn something new – to step away from the obvious track. A lot of needs were colliding together, and the MFA program seemed to provide a solution.

I had always had an instinct for text, and I felt that this MFA course would put me in touch with the tools I needed to work with language and dramaturgy – to develop my theatrical side. It would also open doors to the worlds of theatre and opera. My main motive was a desire to become an opera director – it still remains a strong interest.

How different was it to work with actors?

I love working with actors, because I really enjoy analyzing text. With dancers, you guide them from the outside. With actors, you give them clues to manifest ideas internally. Words are concrete and can get to the heart of things, while movement deals with abstract states. When I started the MFA program, my eye was strong but my ear was weak. The greatest lesson I learned was how to lift the text off the page – to develop a point of view about what the playwright is trying to say. I was clear in my mind on the “why” of the text, but I had to learn to articulate these thoughts in words.

Your ProArte piece, Future Perfect Continuous, is certainly text driven, which is a departure for the company.

Artistic director Roberto Campanello wanted to push his dancers in new directions, and he thought they were ready for that kind of stretch – the marriage of text and movement. In truth, the performing arts are all playing in the same zone. The walls are blurring between the disciplines, and I had been moving in this direction. A recent work I did for the National Ballet School included a long spoken monologue, while a new piece for Ballet Kelowna used the dancers’ voices.

How did you come to work with playwright/librettist Anna Chatterton on Future? She’s a really creative force in both the theatre and opera worlds.

A mutual friend suggested her, and I saw her work Quiver at Buddies. She’s certainly very versatile. We met for dumplings and really got along. In our first workshop, it was inspiring to watch Anna toss around language and text.

What is your point of departure for the piece?

Anna and I started with a discussion about the future – what in our lives were we most concerned about? For both of us, the question was, how do hope and optimism cope with denial and ignorance? We discovered that the place of hope was high in both our lives. It was important, however, that we not make the work a lecture. The dancers are not on a soapbox. We wanted to leave room for the audience to reflect on the subject, to relate to the dancers in their feelings of frustration and inadequacy, to think about the concerns we raise. Things are not tied up neatly.

Just how much text do the eight dancers have to deal with?

It’s 35 minutes long, and contains about 25 minutes of spoken word, which includes monologues and conversations. The dancers are really meeting the challenge of moving and talking. The audience is going to need their ears opened as much as their eyes to catch what they’re listening to.

What about Anna’s text?

The dancers are seen working out their frustrations about the future in both rage and hope. As the size of the problems facing them grows, the text descends into doubt and vagueness and incomplete sentences. It’s very human. It’s about life. There is also humour, which is one of Anna’s trademarks.

Did you fit in music with the text?

The underscore is an orchestral version of songs by the alternative British rock supergroup Minor Victories.

Let’s talk about your Older & Reckless piece for the great ballerina Evelyn Hart, although in terms of dance, she’s a senior citizen.

Claudia Moore, O & R’s artistic director, wanted Evelyn on the program, and she thought of me as choreographer. Like Evelyn, I’ve had the experience of ups and downs. The solo is a character study of a woman of a certain age, which utilizes Evelyn’s remarkable skill as a dramatic actress. I’ve set it to a luminous Handel aria.

Is Evelyn still a perfectionist? She used to demand a lot from her choreographers and dance partners.

We spent ten hours in a rehearsal room, meeting once a week. Dancers are trained to make choreography work, but with Evelyn, if something didn’t fit right, we fixed it. She’s very organic, quiet, delicate and powerful. Abiding is about her in this moment. Because it’s a piece for Older & Reckless, time has a bearing.