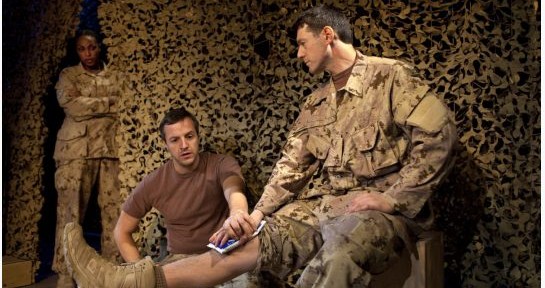 It just so happens that I saw two plays in a row that use the structural device of monologues, so they make an interesting joint review.

Two Rooms by Mansel Robinson, (in a French translation by acclaimed Quebecois playwright Jean Marc Dalpé), focuses on the murder of a Moslem wife by her “white” cop (read Canadian) husband. By extension, it is also about the great racial/religious divide. Hannah Moscovitch writes political theatre. Her This Is War is a close look at the stresses placed on Canadian soldiers in Afghanistan, particularly the night before a joint operation with the Afghan army that goes sour.

Now these synopses are woefully inadequate in terms of content, but my main concern is the use of monologues. In Two Rooms, the two-hander is made up of monologues by the wife (Elkahna Talbi) and the husband (Dalpé), although they do intersect briefly. Moscovitch cuts to scenes after her four soldiers (Lisa Berry, Sergio Di Zio, Ian Lake and John Cleland) have spoken.

The two plays share another element – the audience knows the ending from the onset, but not the why and the wherefore. Thus, a good playwright has the knack of revealing facts through conversation. A weak playwright tells us everything up front and nothing is discovered, as it were. Clearly, the audience has expectations. Why did the Moslem wife have to die? What happened at the joint operation and the night before? What the playwrights are hoping for is that their revelations are of sufficient interest to keep the audience’s attention – and, more to the point, that the subsequent unfolding of events is equal to the outcome that the audience knows in advance – and in this, they both succeed. Robinson and Moscovitch are able to build the case for their endings (beginnings). In neither play is the audience left thinking that the end was less than the means.

Then there are the unseen listeners/askers of questions. The monologues in these plays are not mere self-ruminations. For example, in Two Rooms, we know right from the start that the policeman is in a police interrogation room. We also find out early on that the wife has had an affair. She is presumably at a psychiatrist’s office, using her storytelling to build up courage to confront her husband with the truth about her relationship. In This Is War, it is probably a reporter, or perhaps a member of an inquiry board who is the listener. We know that there has been a traumatic joint op experience with the Afghan army. The questions the soldiers are asked also deal with what happened the night before. In this way, the playwrights reel in the audience, playing the line a bit at a time, tickling the fish. We become those unseen questioners with, in the case of an accomplished playwright, a strong need to know.

Robinson is very clever. As the policeman details his rising paranoia that his wife is a terrorist, she grows in strength as she marches her way to the truth. Moscovitch, at first, has her soldiers lie, or withhold information, but she also uses the device of repeated scenes. Each time we see the repeat, she includes more information. Bits of monologues also repeat. By the end we are left with the clear knowledge of the terrible stress syndrome that motivated the soldiers in their actions during that fateful and disastrous joint operation. Along the way, Moscovitch also slips in details about what life is like for a soldier in these dismal desert encampments.

Dalpé and Talbi give wonderfully nuanced performances. His character has been blessed with delicious lines of dark, ironic humour, in comparison to his wife’s intense, humourless self-evaluation. It’s a good contrast. Moscovitch’s play is fraught with tension. There is the hardened, womanizing sergeant (Cleland), the idealistic young recruit (Lake), and the troubled female corporal (Berry) who is the object of their desire. (This play could be a good case for why women shouldn’t be serving in the front line!) Di Zio is the gay medic who tries to keep the esprit de corps together. They are all coiled springs and the angst is palpable.

A special commendation should be made for Cleland. He was replacing the injured Ari Cohen, but he was so into character that one forgot that he was on script. Kudos to directors Geneviève Pineault (Two Rooms) and Richard Rose (This Is War) for crafting productions that highlight both words and character. Norman Thériault’s evocative set for Two Rooms is a cage, a suitable metaphor for the play, When it comes to Dora Award time, Camellia Koo deserves a nomination for her sensational design for This Is War that literally cocoons the audience in camouflage netting.

In the final analysis, monologues have been around since Greek theatre, and certainly brought to brilliance in Shakespeare. In the capable hands of playwrights assured of their craft, they remain a tried and true literary device.