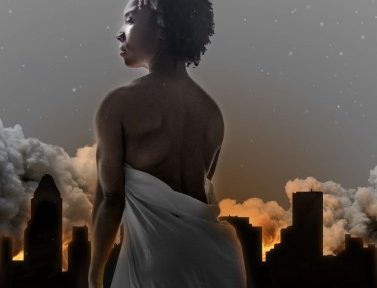 The touring production of Lorena Gale’s Angélique (1995) is a class act. Originally presented by Montreal’s Black Theatre Workshop and Tableau D’Hôte, the classic play is performed with both earnestness and imagination. It has taken over two decades for this important play to make it to Toronto, but given the excellence of the production, the wait has been worth it.

Marie-Joseph Angélique was a 29-year-old slave who was tortured and hanged in 1734 for burning down 46 buildings in Old Montreal. Born in Madeira, Portugal, she was sold several times before arriving in Montreal with her new owner, fur trader and ironworks merchant, François de Francheville. Whether Angélique did or didn’t commit the arson is a moot point. A scapegoat was needed to atone for the destruction, and a hostile slave who had threatened a reign of terror was perfect for the role. Because of her defiance against enslavement (she tried twice to escape), Marie-Joseph Angélique has become an enduring symbol of black resistance, and that message is at the heart of Lorena Gale’s epic play.

Acclaimed Montreal-born, Afro-Canadian actor/playwright Gale (1958-2009) portrays the bare, terrible facts of Angélique’s short life in a series of scenes that meld into one another in a seamless flow. There is an old-fashioned, almost majestic quality about the play manifested in its formal structure and highly poetic text. Director Mike Payette is a good candidate for the Stratford Festival because he understands how to present stories that are larger than life. His approach is to treat each vignette as being pregnant with meaning, because each event fuels Angélique’s lust for freedom. These are not merely scenes from a life; these are experiences that underscore the loss of liberty, and it is this subtext, rather than the narrative line, that drives the play.

Even Eo Sharp’s stage design has a classical look about it, with a balcony for the musicians at the back of the stage. In the darkened alcove below, are costume changes for the actors and benches for them to sit on. In centre stage, is a single platform, with a running block that slides from back to front to create various playing areas. On the sides are two lofts with ladders. The entire wooden structure speaks of olden times and older stages. Sharp’s costume palette is interesting. Angélique begins in period clothing and slowly moves up to modern dress, in particular a maid’s uniform, and in the trial scene, the infamous orange prison garb. In contrast, her owners begin in modern dress and move backward to 18th century attire. In his program notes, Payette tells us that Gale felt that the legacy of Angélique carried into modern times, and that it was important to place her story in a world where “now is then, then is now”.

Payette is very creative in his use of props as symbols. At one point, François hangs tightly on to the drawstrings of Angélique’s corset as she strains away from him in a perfect metaphor of ownership and sexual oppression. In another, two white billowing sheets are placed on the ground to represent snow. Payette’s direction is full of these imaginative and powerful visual images, which elevate the play from the retelling of an historical event, to the realm of classical heroic drama where symbols play an important part.

I am assuming that it was Payette’s idea to use the four-man SIXTRUM Percussion Ensemble to compose and perform live the stunning cinematic score. Their large array of instruments produces evocative accompaniment for each scene and scene change, as well as the various sound effects. For example, when Angélique is whipped by her mistress Thérèse, she has her exposed back to us, her body writhing with the pain of each stroke as meted out by the musician above with a slapstick. No actual whipping occurs, just sound and physical movement, with a silent Thérèse standing by, in what is a very effective piece of stage business. The Montreal percussion group is a past master at creating an aural rainbow.

This production of Angélique introduces us to an impressive cast of mostly Montreal-based actors who are new to town, and who are very welcome I may add. They certainly can handle Gale’s elevated writing style, an even greater feat since English is not a first language for several of the members. Diction throughout is superb, and director Payette has treated the script like a classical play in the richly articulated delivery of the words.

Jenny Brizard (Angélique) is simply outstanding. Apparently she has training as a dancer, which is evident in the supple and fluid way she moves her body. Angélique’s every frustration is writ large, and the slave’s obsession with freedom underlines every word Brizard utters. The actor is also able to convey volumes of emotion just by standing still. She is an absolutely compelling performer. The journey Angélique takes contains one humiliation after another. Having to give in to the sexual demands of her master, the forced copulation with César to produce more slaves, the beatings by her mistress, to name but a few, then having to undergo a trial where she steadfastly proclaims her innocence, only to admit that she committed the arson after the most gruesome torture. All the while, Brizard’s blazing performance captures Angélique in all her glorious bravery. (Incidentally, Angélique was tortured by brodequin, a method that crushes the legs, and Brizard’s matter-of-fact detailing of this horror is agonizing for the listener.)

Karl Graboshas (François, Angélique’s owner) is a tall beanpole of a man with a strikingly malleable voice, who can instil fear in the most soft-spoken manner. France Rolland (Thérèse, François wife) gives a riveting performance as a woman driven by bitterness and disappointment. Olivier Lamarche (Claude, François’s indentured servant and Angélique’s lover) portrays a decent man who gave up his freedom willingly to find a new life in the new world. The actor is convincing in showing both Claude’s strengths and vulnerabilities.

Omari Newton (César, Angélique’s mate) gives a quiet dignity to the role of a slave who has accepted his fate. His owner wants him to father children with Angélique, and he complies. His calm and compassion come from his resignation to slavery. Rounding out the cast are Chip Chuipka (Ignace, François’s business partner and César’s owner) and PJ Rudat (Manon, an “Indian girl” and César’s true love). Chuipka brings decades of experience to the stage and conveys a superiority to the manner born as befits a Nouvelle France elite. Prudat portrays a comely beauty whose gentle exterior belies a feisty inner drive. In fact, Gale would have us believe that Manon set the Montreal fire to free herself of Angélique, and clear the way to César.

Kudos to Factory and Obsidian for bringing this landmark Montreal production of classic Canadiana to Toronto. It is a most satisfying theatrical experience.