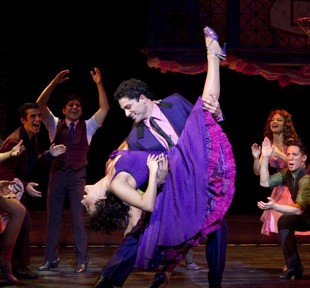 The time has come to acknowledge that West Side Story is a dated museum piece.

The production currently playing in town is the touring version of the acclaimed 2009 Broadway revival. The New York critics went gaga. One can only assume that the show is such a sacred cow, that tunnel vision sets in.

In this version, the Puerto Rican’s speak Spanish to each other, and even some of their lyrics are translated into Spanish. I did find the constant switch between the languages distracting, a little Spanish here, a little English there, without rhyme or reason. Apparently original librettist Arthur Laurents worked on this version himself before his death at age 93 last year. His direction has been faithfully recreated by David Saint. Among other innovations is a new ending which is absolutely illogical. One of the Jets places Maria’s shawl on her shoulders and she grabs his hands. Go figure…

We’re just too cynical. The Somewhere ballet (“There’s a place for us…”) just seems too Pollyannaish, and now that Anybodys (Alexandra Frohlinger) is singing it, almost embarrassingly maudlin. In the original production, the lyrics were performed by an offstage soprano which made the number more ethereal. I even remember the singer’s name – Reri Grist – who went on to an international opera career. The choreography for this sequence now seems absolutely inept. You could hear suppressed giggles coming from all sides of the audience.

The real datedness comes from the fact that all professional stagings must use Jerome Robbins’ original choreography. Since the choreographer/director died in 1998, audiences will have to wait until 2048 for a completely revisionist approach – that is, when the copyright ends. If Shakespeare’s Romeo and Juliet seems timeless, it is because every new production can start from scratch. Joey McKneely has, I’m sure, become a rich man going around the world staging Robbins’ choreography.

The one place where a professional production can make a difference, is in the sets and costumes. This revival goes for the base minimum, and as a result, looks cheap, putting on stage that which is required, like the fire escape. I really got irritated when I saw Anita’s purple dress with the pink petticoats in the dance at the gym sequence. Anita is always in a purple dress at the gym. James Youmans and David C. Woolard, respectively, show no imagination at all.

There is no getting around the fact that these New York gang members are basically portrayed by chorus boys. Good dancers and singers, but not exactly scary. As for the lack of hard core swear words, that could have been changed over the decades since 1957. Once again, a museum piece.

Which brings us to the leads. Again, they can sing and dance, but one wonders what were the casting crew thinking? It sure wasn’t sing and dance and look the part. Ross Lekites as Tony has a passionate sob in his voice, but has the charisma of a wet noodle/choir boy. Evy Ortiz is sweet, but that’s not enough. And the chemistry between them is nada. The second leads fare better. Michelle Aravena makes a great Anita, but she garbles her words (at least in English) and seems to be playing the stereotype. German Santiago’s Bernardo is probably the best of the bunch. At least he’s got some fire. Drew Foster’s Riff plays it all on one note.

I think this production (meaning the Jerome Robbins’ production) should be retired. If anyone wants to see it, rent the movie.