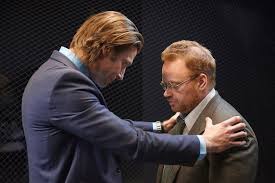 Sadly, I couldn’t get to The Coal Mine’s latest production until late in the run. I say sadly, because the play closes this weekend which means I’m trumpeting a superb theatre outing that is almost at its end.

The Coal Mine, whose performing space sits under a pizza restaurant on the Danforth, is in its first season. Their mandate, under artistic producer Diana Bentley and artistic curator Ted Dykstra, is to create an off-Broadway experience that is as intimate as it is provocative. Their first production, The Motherfucker with the Hat by Stephen Adly Guirgis, was a monster hit. This second play, Mike Bartlett’s award-winning Bull, is another jewel in Coal Mine’s crown. Thirtysomething Bartlett is among the Young Turk playwrights who are spreading shockwaves through British theatre, and Bull is harrowing to say the least.

Bartlett’s focus is a sales office where a team of three are waiting for a meeting with their boss. Their firm is downsizing and one of the three will be let go. Think of Waiting for Godot meets capitalism, although in this case, the boss does show up to do the dirty. The crux of matter is that two of team, namely the sleek Isabel and lounge lizard Tony, treat their colleague Thomas, who is not one of the beautiful people, with utter contempt. The fact that they regard their cruelty to him as a matter of fact, even as a necessity, is the worst aspect of social Darwinism writ large. Their relentless bullying, harassment and humiliation of Thomas is like watching a wolf pack circling its prey for the kill.

For me, director David Ferry can do no wrong, and once again he has shown his brilliant craftsmanship. Ferry has understood absolutely that this play depends on timing, especially since the viperous verbal darts hurled at Thomas have to aggregate collectively like death from a thousand cuts. The English accents also work very well.

As the bitchy Isabel, Bentley presents a woman who is supremely confidant, magnificently establishing herself as a warrior of corporate feminism. She is attractive but deadly. Handsome Damon Runyon (I wonder if he is a relative of the famous Broadway writer) is perfect as the conniving, manipulate Tony, soft of speech, but murderous in intent. Mark Caven makes the most of his brief moments on stage as the cold fish boss Carter. He is rough, gruff and brutal with ice flowing through his veins.

When Dora nominations come around, Ryan Rogerson as the hapless Thomas, deserves to be among the nominees. He manages to be both feisty and vulnerable at the same time, and although he is neither passive nor submissive, nonetheless, his attempts to maintain face is a losing battle. It’s to both Rogerson’s acting acumen, and Bartlett’s writing skills, that Thomas is not a particularly likeable victim. His tormentors are far more interesting, which makes the play all the more disturbing, even subversive.

Steve Lucas’ set is a cage that surrounds the action on three sides, but looking through the wire distorts one’s vision. It works in theory, but does get distracting over time. Nonetheless, the cage does conjure up thematic images like a bull ring, a bull pen, even bullying itself.

And a final note of kudos to The Coal Mine. The company’s knack for picking fascinating plays, and peopling the stage with talented actors to breath life into the words, makes The Coal Mine one of Toronto’s must see theatre experiences.

(The Coal Mine’s production of Mike Bartlett’s Bull runs from Mar. 17 to Apr. 5.)