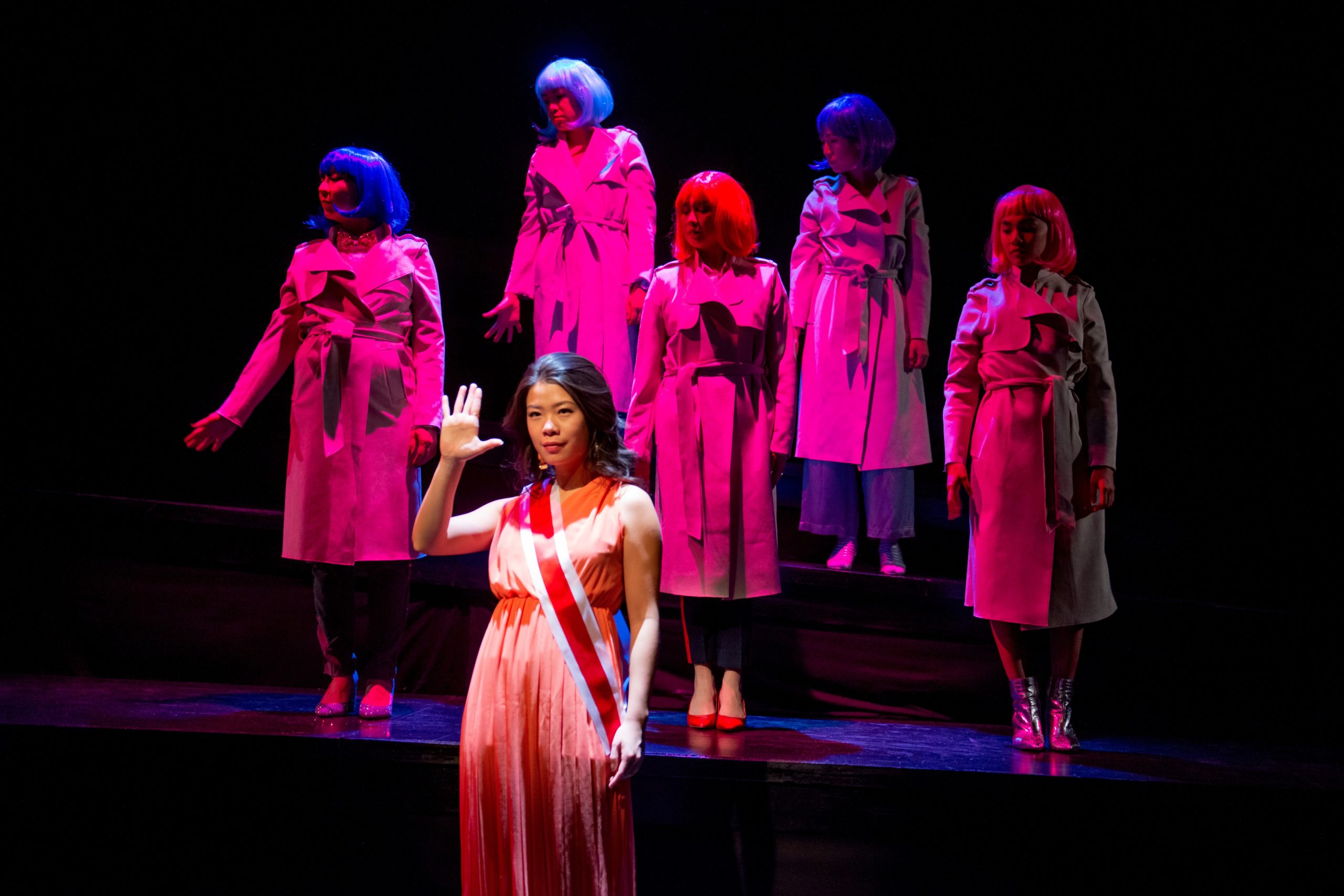 Lady Sunrise is an ambitious play that features the work of two Asian titans of Canadian theatre – playwright Marjorie Chan and director Nina Lee Aquino. Set in Vancouver, Lady Sunrise introduces us to six Asian women from different strata of society whose stories interlock with each other. Chan’s focus, as she says in her program note, is each woman’s relationship to money, because money equals power. In short, Lady Sunrise is a big, sprawling play filled with big ideas performed by a sterling cast of Asian actors.

The genesis of Lady Sunrise is fascinating. Chan has based her play on the 1936 classic Sunrise written by Cao Yu (1910-1996). Yu, “the Shakespeare of China”, and an admirer of both Chekhov and Ibsen, is credited with introducing the western concept of “spoken theatre” into modern Chinese literature. When the Communists took over the country, Yu’s plays were deemed politically correct because his main theme was the moral disintegration of decadent society and the corrupting influence of money. Sunrise tells the story of several women in Shanghai who can’t escape their tragic fates. Among the main characters are the educated, high-born courtesan Chen Bailu who holds court in a luxury hotel, the prostitute Cuixi who works at the third class Precious Harmony brothel, and a young girl called The Shrimp who is sold into the sex trade.

Chan’s has fashioned the six women of Lady Sunrise by taking them directly out of Yu’s play, or transforming male characters into women, or collapsing several characters into one, or creating original characters from her own imagination. Penny, or Lulu as she likes to be called (Lindsay Wu) has become a minor TV and gossip column personality by participating in Hong Kong beauty pageants. As she tells us, she is always available when they need a pretty girl to stand beside an ugly politician. Penny’s mentor is the older Tawny Ku (Ma-Anne Dionisio), a scheming wealthy socialite with a young lover. At the lower end of the scale are the cynical prostitute Charmaine (Louisa Zhu) and the newly trafficked young girl Sherry (Belinda Corpuz). We also meet the hard-edged, hard-nosed realist Banker Wong (Rosie Simon) and the widowed Dealer Li (Zoé Doyle), a casino worker trying to keep her family afloat. Dionisio and Simon are particularly strong, but all the actors perform with commitment and intensity.

The playwright’s modus operandi is mostly a series of monologues where the women tell us their inner most thoughts. There may be no male characters in the play, but men and their influence are never very far away. Chan has an excellent way with words and her portraits of the women and their struggles are sharply drawn. The play also features a Greek Chorus effect where, while one woman is talking, the others are choreographed in sync to reflect mood or emotion, thus making a physical connection between them all. It’s a very strong visual image that speaks to both conformity and peer pressure, and assistant director Natasha Mumba is credited as movement director. Jackie Chau has designed a series of eye-catching, well-defined, character-specific costumes that certainly deserves Dora Award recognition.

Clearly director Aquino had a strong vision about how she wanted to mount the play, and Camellia Koo has given her a startling set design. The first impression is a series of sloping ramps, one above the other, that resemble terraced rice paddies. Overall, these ramps can be seen as the various paths one can take to determine your upward or downward journey through life. Aquino has placed the women at various times on different ramps, and even when they engage in conversation, they can be sometimes ramps apart. Where they appear informs their characters, and the physical movement of the show is almost as important as the words that are spoken. As well, the ramps are separated by Mylar streamers, and this shiny, reflective surface represents the glittering dream to which all aspire. Michelle Ramsay’s meticulous lighting follows the action precisely, while Debashis Sinha has layered in a striking cinematic sound design.

On one hand, Lady Sunrise can be seen as pure melodrama, given the downward fortunes of most of the characters. Chan is certainly not a subtle writer. On the other hand, she is not afraid to let emotion overtake her characters, and as a result, Lady Sunrise is infused with energy and vitality that sweeps the audience along in its wake.