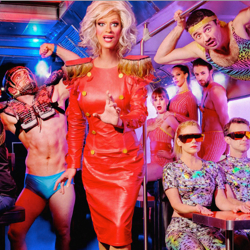 The Irish theme at this year’s Luminato Festival continues with RIOT. The production is the brainchild of THISISPOPBABY (aka Jennifer Jennings & Phillip McMahon), a company that bills itself as having one foot in high art and the other in trash culture. Their mandate is to produce high-octane shows that blur the lines between circus, comedy, burlesque, dance and nightclub. Clearly Luminato programmed RIOT to attract the younger demographic, and the audience was filled with twenty and thirtysomethings out to have a good time. (The bar was kept open throughout the performance.)

So where does an old broad like me fit in with the ethos of RIOT? Not too well, I’m afraid. The format features acts that are on a loop as the 11 performers keep recycling themselves. The MC – Panti – one of Ireland’s foremost drag queens, garbled her words to an irritating degree. I’m sure there were things I could have laughed at if I could make out what she was saying. The language that I did take in, however, made me feel she wasn’t naughty enough. In other words, a pretty flat performance.

The street poetry segments performed by Kate Brennan were too long, and her three sets were way too many because she slowed down the show. Both Panti and Brennan were given rants designed to warm the cockles of liberal hearts and piss on corporate culture, while encouraging the audience to forge their own path and fuck destiny. Admittedly, I did like Brennen’s warning that the purpose of RIOT was to be a “theatre grenade“ (a phrase I plan to steal). Nonetheless, by the end of the show, these socio/political tirades had become so strident that I felt I had been hit over the head with a politically correct sledgehammer. As a mellow filler throughout the show, four singers appeared from time to time performing innocuous original pop songs composed by Alma Kelliher.

RIOT is not without its charms, however. Two acrobats (Cian Kinsella and Cormac Mohally) who call themselves Lords of Strut are hilarious. Their act is built upon one guy balancing in various poses upon the other. My absolutely favourite laugh-out-loud moment was when one of the Struts handed out swimming noodles to audience members, and invited them to come up on the stage and whip his cohort who was dressed as Jesus. I was surprised by the intensity of the noodle-holders as they really laid into the poor guy with gusto.

Ronan Brady who bills himself as a physical artist is a prime example of Irish beefcake. He performed his eye-catching aerial routines on a giant hoop and hanging leather straps, throwing in a clever striptease in the bargain. As each jockstrap was removed, it revealed an even skimpier one beneath, and just as it came to show-all time, Panti whistled him off the stage. Also entertaining were movement artists Up and Over It (aka Peter Harding and Suzanne Cleary) who did an eye-catching, lightning-fast, rhythmic hand-dance on a table while adding in Irish step dance with their feet below.

Even though I complain about Kate Brennan above, her middle set was an earnest rendering of street poet Emmet Kirwan’s poignant Heartache, a feminist tale about an Irish teenager who has to bring up her baby on her own. Apparently it’s quite famous and has a wide viewership on YouTube as performed by Kirwan. And finally, a very odd sequence of the show should be mentioned. As Brady performed calm and quiet manoeuvres in his giant hoop, the voiceover of an elderly man talked about problems with his iPod and Apple customer support in Bangalore. This phone call, anchored in the reality of today, leads the man to remember more innocent times when there were no dreams of iPods. It was an affecting moment even though completely out of place given the bumptious nature of RIOT.

For this show the Tanenbaum Opera Centre has been transformed into what Luminato calls the Festival Cabaret Room. Surrounding the stage are nightclub tables, with bleacher seating behind. The atmosphere is a sound and light show with pulsing music, flashing lights and colourful costumes. In fairness, I should say that the crowd gave RIOT a sort-of standing ovation, a lot of the crowd that is, but not all. I have been to spiegel tent shows such as RIOT and loved every minute of them. Unfortunately, RIOT is too much of a mixed bag to be totally successful.