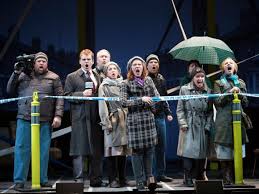 Canadian Stage. LONDON ROAD (4 ½ stars). Run don’t walk to see one of the most unusual shows in town that is soon to close. The serial killer of five prostitutes in Ipswich, England, had a flat on London Road. Verbatim playwright Alecky Blythe interviewed residents of the street to capture what they went through during the investigation, arrest and trial. These conversations were then set to music by composer Adam Cork. The resulting sung monologues/dialogues are astonishing in their reality. The cast is unbelievable (all kinds of Stratford/Shaw types), gilded by director Jackie Maxwell and her Shaw Festival music director Reza Jacobs. The costumes and the set are terrific. I’m deducting marks for some impenetrable accents. Nonetheless, once again, CanStage scores big with a North American premiere. (Written by Alecky Blythe and Adam Cork, directed by Jackie Maxwell, Closes Feb. 9, Bluma Appel Theatre, www.canadianstage.com.)

Tarragon Theatre. FLESH AND OTHER FRAGMENTS OF LOVE (3 stars). Evelyne de la Chenelière is one of Quebec’s foremost playwrights, but she falters on this latest offering. The play is inspired by a novel by French writer Marie Cardinal, and dabbles in magic realism. A troubled French couple (Blair Williams and Maria del Mar) is on vacation in a remote part of Ireland, when the husband finds a dead body washed ashore on the beach. The corpse is Mary (Nicole Underhay), a medical student and single mother. Pierre and Simone begin to make up a back story for Mary influenced by their own negative experiences, while Mary herself speaks about her own life and that of Pierre and Simone. Karyn McCallum’s set and costumes are arresting, but the text itself runs out of steam. Richard Rose’s direction seems a tad on the slow side. (Written by Evelyne de la Chenelière, directed by Richard Rose, Tarragon Theatre, Jan. 7 to Feb. 16, 2014, www.tarragontheatre.com.)

Soulpepper. IDIOT’S DELIGHT (2 ½ stars). This is another one of Soulpepper’s irritating productions – good intentions that fizzle out. The very successful play, written in 1936, by Robert Sherwood, actually anticipated World War 2, and which side various countries would end up on. Sherwood also adapted his play for the MGM all-star movie featuring Clark Gable and Norma Schearer, directed by Clarence Brown. Director Albert Schultz’s version doesn’t come even close. The Soulpepper production is beset by uneven acting and insipid direction. More to the point, Raquel Duffy, in the key role of Irene cannot be heard. Doesn’t anyone at Soulpepper actually do a voice check in the theatre? Some like Dan Chameroy, and particularly Evan Buliung, rise above the fray, but there is no sense of an ensemble. The play is one where a group of people end up being marooned together (in this case, an alpine resort on the northern Italian border), and collisions of ideas happen. The recipe is here for intense interaction, but this whole production is paint by numbers. And then there is Lorenzo Savoini’s set that looks like a giant tiled washroom. Soulpepper gets a plus mark for putting this rarity on the stage, but not for the production. (Written by Robert E. Sherwood, directed by Albert Schultz, Jan. 30 to Mar. 1, 2014, www.soulpepper.ca.)

Tarragon/Theatre Smash. THE UGLY ONE (4 stars). This revival from 2011 retains the original cast and creative team, all to good advantage. German playwright Marius von Mayenburg has written a fable that deals with important issues like image, identity and perception. The plot begins with an inventor who works for a large corporation. His boss will not let him present his discovery at a convention because he’s too ugly. And so begins von Mayenburg’s twists and turns which also take on the whole obsession with plastic surgery. The acting is superb, while Ashlie Corcoran directs with both passion and humour. The play is short, sweet, and packs a wallop. (Written by Marius von Mayenburg, directed by Ashlie Corcoran, Jan. 7 to Feb. 16, 2014, www.tarragontheatre.com.

Nightwood Theatre. FREE OUTGOING (3 ½ stars). The over the top melodrama of Bollywood movies carries over into this play whose premise is that a teenage girl’s sexual encounter ends up on youtube. Indian writer Anupama Chandrasekher has set the play in the conservative city of Chennai (where she is based), and the action is relentless as the fallout spirals out of control. From the neighbours who want the family kicked out of the apartment building, to the hungry media and their feeding frenzy, the consequences are extreme for everyone involved. Anusree Roy as the mother gives another of her sterling performances. (Written by Anupama Chandrasekhar, directed by Kelly Thornton, Factory Theatre, Jan. 28 to Feb. 16, 2014, www.nightwoodtheatre.net.)