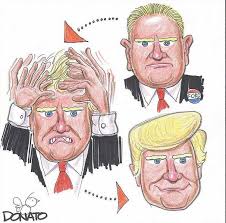 On the night Donald Trump was elected, comedienne Jenna Friedman on a late night talk show summed up the situation perfectly with – “We’re fucked.” Never did I think that I would be in the same boat with a meathead elected as premier in my own province. Now it’s my turn to say, “We’re fucked.”

The only smart Ontario voters live in Toronto. I’m talking about the old Toronto, the real Toronto without Etobicoke, North York and Scarborough, all of which might as well be in the 905 belt. They are suburbs, not city. No Doug ford here. He didn’t deliver Toronto. All eight downtown ridings voted NDP.

I want to start a separatist movement. I want Toronto to secede from Ontario – just the old Toronto, the real Toronto. We who live in the city are at the mercy of Luddites and nincompoops. I am not a loyal Ontarian, not after this election.

Let’s feel sorry for the arts. We’re in for a rough four years. There probably won’t be an Ontario Arts Council by the time the Ford regime is through.

This is what passes for culture in the Ford family. One of Doug Ford’s bottle blonde daughters plays lingerie football. Yes there is an actual league. She tried out for the  Toronto team and posted her delight at making the cut. The outfit consists of a skimpy show-all bra and panties plus football gear – and she’s proud of it. I’m not kiddidng about this. Look it up.

I have always considered Doug Ford as his late brother Rob’s enabler. If Rob was an embarrassment, what are we in for now?

Remember that Doug Ford referred to Justin Trudeau as a “camp counselor” in a sneering reference to the latter’s leadership quality. He’s going to take us back to the Mike Harris/Stephen Harper days.

And let us not forget that Rob Ford wouldn’t march in the Pride Parade. He didn’t want the Rainbow flag flown at city hall either, if I remember correctly. Brother Doug is also a probable bigot.

Welcome to Trumpland, Canada style. The American moron has now a northern foothold.

Did anyone think that Doug Ford was drunk as he made his rambling acceptance speech?

And finally, attention Doug Ford voters. Remember the Chinese curse – be careful what you wish for. Ontario bad.