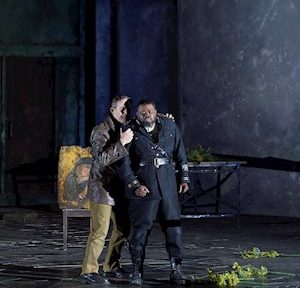 It is starting to get embarrassing. At best I sound like the president of the Johannes Debus fan club, at worst like a stalking groupie, but once again I’m in the thrall of his conducting prowess. The maestro’s musical direction of Verdi’s Otello is simply magnificent.

Otello (1887)is Verdi’s penultimate opera, and arguably his greatest. Verdi, and his brilliant librettist Arrigo Boito, have crafted a masterful rendering of Shakespeare’s tragic tale, distilling the play’s events down to their stark basics. As a result, the text is a taut portrait of a gullible man manipulated into a murderous rage by an evil genius. The score fits the words like hand to glove, and the maestro highlights this aspect with the fluid and supple play of the orchestra. Debus lets the tempi flow where they must to ensure musical storytelling at its most profound. The singers manipulate their voices as if in actual conversation. They power out, they pull back, in short, they do everything they must to make the words meaningful within Verdi’s musical framework. Iago’s sneers, Otello’s hysterics, Desdemona’s bewilderment are all part of the Verdi/Boito fabric as Maestro Debus pulls out all the stops while breathing life into this masterpiece.

The opera is a really big sing and there are some really big voices to carry it off. It’s hard to believe that Canadian-born bass-baritone Gerald Finley (Iago) began his career as a lighter voice Mozartian. His instrument has developed in power to such a degree that he is now doing heavy roles like Iago, Scarpia and Bluebeard. As Iago, Finley displays a voice that is smooth, rolling and even, yet it booms from the stage like a thunderclap. His delivery is perfection. American tenor Russell Thomas (Otello) is currently one of the opera world’s favourite Verdians because he has the strong middle register and ringing high notes so necessary for these roles. His sound is crusty, but in a good way, because this gives it character and colour. American soprano Tamara Wilson (Desdemona) is also a perfect Verdian with a soaring, crystalline voice, yet devoid of any hint of shrillness. Canadian mezzo-soprano Carolyn Sproule (Emilia) has an attractive voice of surprising strength, able to hold her own with the weightier singers around her. Canadian tenor Andrew Haji (Cassio) is the sweet voice on stage, with his lovely, lilting sound. Right now he is singing Alfredo, Nemorino and Rodolfo, but who knows what his future holds. Turkish bass Onay Köse (Lodovico) produces the powerful, commanding, sonorous sound needed for a heavy sing. The third tenor on stage, Canadian Owen McCausland (Roderigo) displays a bright voice in his small role. American Brandon Cedel (Montano/Herald) does not have the opportunity in these comprimario roles in Otello to display his promising bass-baritone as he does in the current production of La Bohème as Colline.

Now for full disclosure. Twin brothers and opera stage directors, David and Christopher Alden, are the bane of my opera experience. These American siblings are the symbol kids, whose modernist and revisionist staging drives me to distraction – which is not to say that they sometimes do manage to create powerful moments on stage. Usually, however, their vision for an opera is filled with questionable symbolic choices that leave me scratching my head in wonder.

David Alden is responsible for this Otello created as a co-pro for English National Opera, Royal Swedish Opera and Teatro Real Madrid in 2013. And yes, it does have strong moments, particularly the long Otello/Iago scene where the latter plants the seeds of jealousy in the former. Nonetheless, in the opening storm scene when the chorus began to ritually shudder and shake, augmented by robotic dancers, I knew I was in for Aldenisms. His vision for the opera, manifested by Jon Morrell’s set and Adam Silverman’s lighting, is towering grey walls that dwarf the singers, where shadows and silhouettes play against those walls. The space is practically empty, sprinkled sparsely with set pieces like chairs and desks when needed. Morrell’s costumes would appear to be just before World War 1, except for Desdemona, whose flowing long dresses recall earlier more romantic centuries. Thus, according to the creators, Desdemona lives in her own bubble.

Iago mostly sits expressionless, watching, only getting up to sow his evil seeds. This idea does work for the most part, but while Iago overseeing his handiwork unfold is good symbolism, sometimes he seems too distant from the action, and there is a disconnect. The armchair in Act 3 that sits front and centre, facing upstage, is also an idea that works as Otello is forced to hunch sideways to be seen, showing that he feels under attack, as it were. Unfortunately, bad symbolism abounds such as Iago and Cassio throwing darts at a religious icon, or Desdemona’s non-existent bedchamber having a fire pit whose flame goes out when she is killed, or the writhing of the chorus during the storm scene. Abstraction is fine, but it has to mean something. Take for example that religious icon. It first appears as a painting on a chair behind Desdemona, than Otello is seen lugging it around. Finally it is hung on the wall for the darts. Duh! Desdemona goes to bed huddled against a wall, sitting on the bare floor in a image better suited to Marguerite’s prison scene in Faust. Or the end of Act 3 where Otello grabs a briefcase out of the hands of an aide, and throws papers all over the stage in a fit of frenzy. Yes he is recalled to Venice, and yes he has just denounced Desdemona, but although I can work out why the director put in this ludicrous behaviour, it is, nonetheless, both surprising and dumb. I find with David Alden, that while his general vision has merit, he throws in symbolic moments like the paper-throwing that takes away strength from the whole.

All that being said, I came away from this production of Otello with a greater appreciation of Verdi’s masterpiece, which I didn’t think possible because I so admire the opera. I can certainly thank Debus, the orchestra and the singers for that, and I suppose, grudgingly, some of Alden’s directorial acumen.