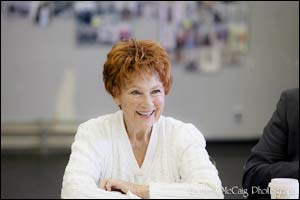 Neil Simon’s 1991 play Lost in Yonkers cleaned up at the Tony Awards and won a Pulitzer Prize. Two decades later, the play still has legs, and there is much to like in the Harold Green Jewish Theatre Company production.

The plot centres around the Kurnitz family.  Young Jay (Alessandro Costantini) and Arty (Jesse Shimko) are sent to live with their stern grandmother (Marion Ross) while their father Eddie (David Eisner) goes on the road selling scrap metal during the war. He has to pay off a loan shark for medical debts stemming from his late wife’s illness. Also in the cast are Eddie’s gangster brother Louie (Ari Cohen), his mentally challenged sister Bella (Finnerty Steeves) and his passive sister Gert (Sheila McCarthy).

This being Neil Simon, we know we are in for a lot of zingy one liners, but that we will get hit by the dark side sooner or later. It’s to director Jim Warren’s credit that he gets both the laughs and the poignancy. Sue LePage’s set and Lori Hickling’s costumes capture the 1940s perfectly.

Steeves, who played Bella in the recent New York revival, is a last minute replacement for Linda Kash. (Kash had to withdraw due to a death in the family, but will be back for the final weekend performances.) Steeves is just lovely in the role, capturing Bella’s childish vulnerability as well as her feistiness. Cohen has never turned in a bad performance and his Louis is both dangerous and charming. McCarthy makes her small role of Gert count for something. The young boys, Costantini and Shimko, may be a bit strident, and seem to be played all on one note, but they get their laughs. Eisner makes for a sympathetic Eddie.

The weak link is Ross, a well-known American television actress. She just is not frightening or commanding as Grandma Kurnitz, although her confrontation scene with Bella works well. We hear a lot about her character before she makes her appearance, but it is more of a whimper than a bang when she does come on stage. Did HGJTC choose Ross for her name power? I can’t believe there wasn’t a Canadian actress who could do the part better. Grandma’s strength and will power dominate the story and they just aren’t there in Ross’ performance.